Currently advertised public notices and hearings of the Crete City Council and appointed boards and commissions will appear below when available.

The City of Crete is seeking proposals from qualified consultants with considerable experience in community design, land use and environmental planning, economic analysis, and citizen engagement to provide consulting services related to a complete rewrite of the City’s Comprehensive Plan and zoning and land development ordinances. The City's zoning code has remained roughly the same since its original adoption in 1977, and it no longer suits the needs of a community that requires sustainable planning and smart growth and redevelopment. The successful candidate will bring a fresh, innovative perspective grounded in a demonstrated understanding of community engagement techniques that encourage buy-in and ownership of the future of the City. Firms with the necessary experience and qualifications are encouraged to submit proposals by 11:00 AM on November 11, 2021.

Additional information can be found in the City Government section: 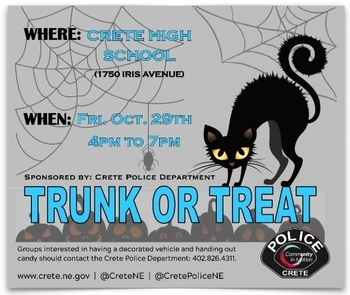 The Crete Police Department is sponsoring a Community Trunk or Treat on Friday, Oct. 29, from 4-7 p.m. in the Crete High School Parking lot, 1750 Iris Ave.

Groups interested in bringing a decorated vehicle and handing out candy should contact the Crete Police station to reserve a spot: 402.826.4311.

This event was last held in the CHS lot in 2019 with a combination of local law enforcement and first responders joined by school and community groups displaying decorated vehicles and handing out candy to costumed youth and families. 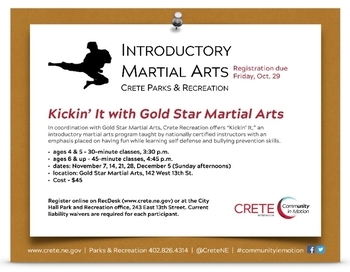 Crete Recreation program signup for "Kickin' It" with Gold Star Martial Arts is open through Friday, Oct. 29. No late registrations are accepted.

Registration forms are available online (RecDesk) or in the Recreation Office at City Hall.

"Kickin' It" with Gold Star Martial Arts, in cooperation with Crete Parks and Recreation, is an introductory martial arts program which offers many benefits to participants: life skills such as respect, discipline, and integrity, physical fitness, safety awareness, self defense, increased focus, and more. The program is taught by nationally certified instructors with an emphasis placed on having fun while learning self defense and bullying prevention skills. There will be multiple classes, depending on registrations. Current liability waivers are required.

More than 80 guests were entertained by Mark Twain, played by Warren Brown, and Andrew Carnegie, played by Tom King, on Oct. 7 during a Crete Public Library fundraiser to purchase outdoor musical instruments for Library Park.

Brown, of Chicago, and King, who lives in Crete and serves as the Library Advisory Board President, spoke in character about their backgrounds, while at the same time teased each other about wealth and lifestyles. Compatriots in real life, the audience learned more about these great men during a lively performance. A question and answer period followed, and each man demonstrated his breadth and depth of the men they portray.

Over 30 donated quilted items, including throw quilts, crib quilts, table runners, and wall hangings, and related items were snapped up in a silent auction that was held during the evening. A total of $7,500 was raised from ticket sales and auction proceeds.

One of the biggest surprises of the evening occurred when two anonymous donors together outbid everyone for the quilt, “Ode to Libraries.” They decided the quilt needed to remain in the library to be on display.

The library hopes to have the park instruments installed by Spring 2022. 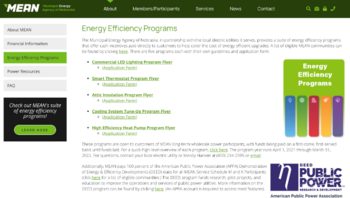 The City of Crete Department of Public Works, in partnership with its wholesale electric power supplier, the Municipal Energy Agency of Nebraska, is continuing to provide five energy efficiency programs to assist in lowering energy costs for local utility customers through energy efficiency improvements.

With cooler temperatures of fall upon us, now is a good time to make energy efficiency upgrades for the upcoming colder months.

These programs are available to customers of the City of Crete through its wholesale power partnership with the Municipal Energy Agency of Nebraska. For more information on these programs, contact the Utility Office at City Hall, 402.826.4312, or go online to download program guidelines and application forms.

Individuals and media outlets are encouraged to contact the City Administrator for additional details or clarification on the following material. Regular meetings of the Crete City Council are held on the first and third Tuesdays of the month at 6 p.m. in the Council Chambers on the second floor of City Hall; Council Standing Committees may meet prior. View a list of City Officials and current council and committee meeting agendas.

The Council renewed the City's membership with Southeast Nebraska Development District. City Administrator Tom Ourada clarified this is an annual membership and each year the city reviews the value of being a member.

The Council entered into an agreement with gWorks to develop a redistricting map for the City's election wards.

The Council waived three readings and enacted Ordinance 2141: An ordinance relating to accessory buildings in the A-1 Agricultural District.

The Council approved Black Hills Energy's new tariff rate and Small Volume Interruptable contract. Ourada said this was presented in August the first time and generally provides new terms for the interruptable rate. This is revenue neutral as the city leases the power plant to MEAN and is reimbursed when it is called to generate; all fuel costs are passed through to MEAN.

The Council waived three readings and enacted Ordinance 2140: An ordinance relating to the management and operations of the electric department.

Reports may be given by Officers, Departments, Committees, or Council members concerning the current operations of the City. No action can be taken on matters presented under this title except to answer any questions or to refer the matter for further action.

Access to the library collections and meeting rooms is open to the public with increased capacity limits. Read more about current library services.

Preschool Story Time at Crete Public Library runs during the school year, starting in in the fall and includes stories on each week's theme with activities or songs and a craft. Story time craft kits are available at the library, inside or at the pickup window at 15th and Forest Ave.

Thursday Preschool Story Time begins on Thursday, Sept. 2, at 10:30 a.m. (view/download the registration form or fill one out at the library)

Special story times are held weekly during the Summer Reading program in June. 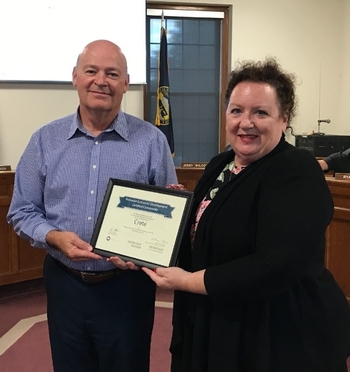 Support for downtown development and efforts to create new housing in the city of Crete (pop. 7,247) have led to recognition from the State of Nebraska. The Nebraska Department of Economic Development (DED) this week announced Crete’s recertification in the Economic Development Certified Community (EDCC) program. DED Business Relations representative and Nebraska Diplomats Executive Director, Lori Shaal, honored local leaders with a special presentation during the regular City Council meeting on Sept.21. Mayor Dave Bauer accepted the recognition certificate on behalf of the City Council and the City.

Crete is one of 40 Nebraska communities to earn status in the EDCC program, sponsored by the Nebraska Diplomats and administered by DED. State officials established the program in 2005 to recognize communities for preparedness to attract new industries and expand existing businesses. As part of the certification process, qualifying cities and villages must identify a well-defined program that engages with their existing business community to offer a supportive environment for economic growth. This includes documenting available sites and buildings, developing local financing and incentive programs and creating ongoing strategic planning. The City of Crete received its original EDCC certification in 2016, and earned program recertification in 2021.

Since Crete’s previous certification, the community has celebrated several new and expanding business projects, including the completion of an 80-room Fairfield Inn and Suites. City leaders are also in the process of opening five new subdivisions, which has created more housing opportunities in the last five years than in the previous 15 years combined. The City recently partnered with local business leaders to implement a private, non-profit company, which served as a successful applicant for assistance from DED’s Rural Workforce Housing Fund. This success has generated even more interest from local businesses, as well as external development interest in workforce housing. City officials say the move will likely pave the way for construction of a sixth subdivision.

“It is an honor to be named one of Nebraska’s Economic Development Certified Communities,” said downtown business owner Tom Sorensen. “This recognition shows great commitment from community leaders to set some goals and improve our quality of life. We are fortunate to be growing, and this acknowledgement confirms that we are growing in the right way.

The City was one of five communities to qualify for Community Development Block Grant (CDBG) funding for Downtown Revitalization (DTR) from DED. The $445,000 investment modernized buildings in Crete’s Downtown Historic District. The City is currently utilizing a second DTR grant with increased participation from local business owners.

“I am personally gratified by the interest and participation by our community in our projects,” said Mayor David A. Bauer. “As a fellow downtown business owner, I am amazed by the improvements taken on by many business property owners who are on board with our DTR projects. I don’t believe any of this would have been possible without our membership in Nebraska’s Economic Development Certified Community program.”

“Nebraska leaders who are focused on attracting development opportunities in their regions understand that growth depends on the overall culture of their business community,” said Nebraska Diplomats President Tim O’Brien. “The City’s initial $500,000 investment in the downtown area highlights overall efforts to show that Crete is open for business, which is an essential part of thriving as an EDCC.”

Voters recently approved a bond issue for a new municipal library, which was completed through assistance from more than $3 million in local donations. In addition, the City committed $2 million to implement a redevelopment and expansion program for Crete’s parks, designed to retain and attract young families to the community.

“Crete’s commitment to growth is reinforced by being an Economic Development Certified Community,” Boldt said. “With this certification and ongoing commitment from the City of Crete, the community will continue to be a Community in Motion. This is a great accomplishment.”

“Being an EDCC opens doors and brings a focus to the community that I don’t think can be matched otherwise,” said Crete City Administrator Tom Ourada. “The rate at which our community is growing and improving is accelerating day by day. I think we can directly attribute this to our certification and the ongoing efforts to remain a part of this important program.”

For more information on the Economic Development Certified Community Program, contact Ashley Rice-Gerlach at 308-655-0919 or ashley.gerlach@nebraska.gov, or visit https://opportunity.nebraska.gov/program/economic-development-certified-community-edcc/.