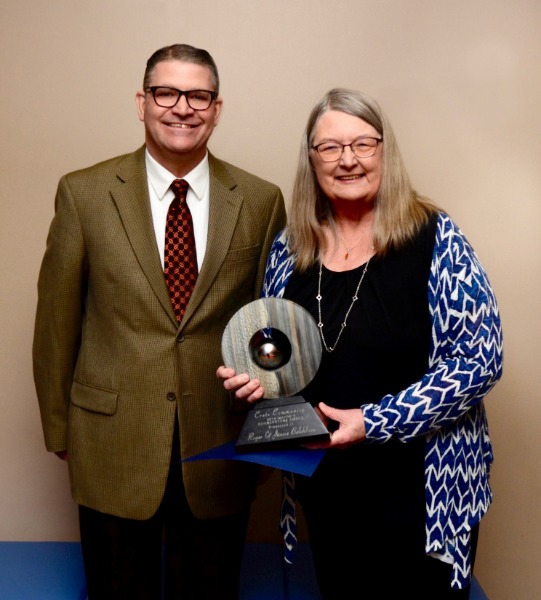 Mayor Roger Foster presented the Cornerstone Award to Janice and the late Roger Belohlvay in honor of their commitment to Crete and the business community, in which they used their entrepreneurial spirit to help create and sustain growth and success in the town they called home.

Foster made the presentation at the annual Crete Chamber of Commerce banquet on Thursday (Jan. 24) at Perry Campus Center on the Doane University campus.

The Cornerstone award from the the mayor and City of Crete recognizes individuals and businesses for their efforts and commitment to community betterment.

“Janice and Roger must have met with city officials two or three dozen times on housing and trying to get a project going that would benefit the community,” Foster said. “Toward that end, the Belohlavys played a significant role in several sizable annexations and the creation of the western redevelopment district on the west side of Crete.”

They began pursuing opportunities for their property on Crete’s west edge a couple of years ago, working with city officials in the process. After Roger Belohlavy died in June 2018, Janice continued those efforts.

Foster said he received a letter from the Nebraska Investment Finance Authority on Dec. 17 notifying the City it has issued a conditional reservation of tax credits for Belohlavy Estates in Crete, an advantage for developers involved.

"We are excited to see what the future holds for this area,” Foster said. “Our only regret is that Roger isn’t here to share in the success and excitement we are all experiencing.”