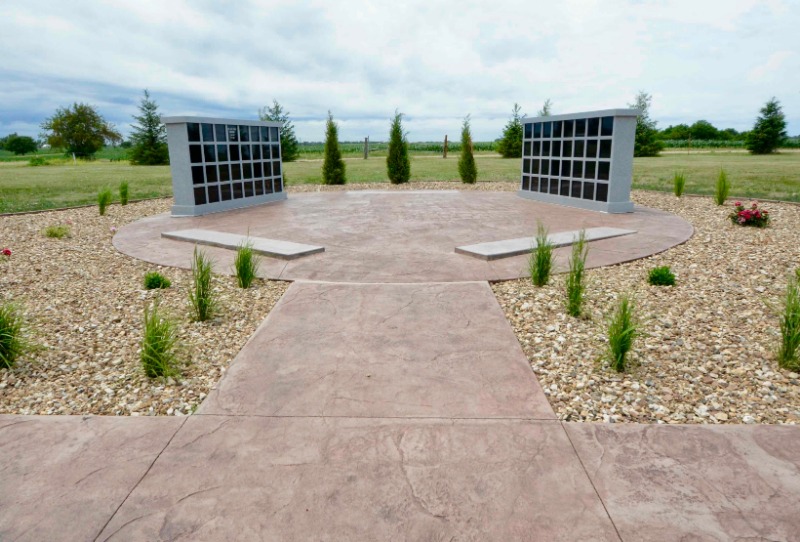 The columbarium in the northwest corner of Riverside Cemetery is a structure for the placement of funeral urns.

Doane Professor Arthur Fairchild platted Riverside Cemetery in 1879 and patterned its parklike surroundings after Mount Auburn Cemetery in Cambridge, Mass., a rural cemetery founded in 1831 with a columbarium dating to the early 1900s.

Riverside Cemetery's late New England inspiration is evident in the shaded paths, original limestone retaining walls, and the greenery in Tuxedo Park on its eastern border, while the recent columbarium addition looks out to the more familiar prairie and tended fields on the west.

From the main entrance, located just over the West 13th Street bridge, visitors navigate to the northwest corner of Riverside Cemetery to the columbarium, a structure for the placement of funeral urns, which gives families and friends a respectful and appropriate option to a traditional burial in honoring the last wishes of their loved ones.

Completed in 2017, the Riverside columbarium includes two walls of granite and marble with niches, or compartments, for cremated remains, situated on one of three circular, concrete pads.

Columbaria can be found all over the world, both as relics and in modern construction. They were built partially or completely underground in ancient Rome and housed within the Buddhist temples of Japan. Later versions were built in cemeteries or adjoining churches. Columbaria can be free-standing walls or similar monuments, or within buildings and mausoleums.

Many cemeteries and churches in the U.S. have columbaria of various designs, dimensions and adornments. A 2013 addition to the columbarium at Arlington National Cemetery has 20,000 niches for urns.

A drafted set of rules and regulations for Crete’s Riverside columbarium includes size and placement guidelines for urns in the niches. Engraving on the outside of each space will be done exclusively by Speidell Monuments, Inc. The interment process, as well as all landscaping, will be done by cemetery officials through the City of Crete - Public Works Department.

The City of Crete owns and maintains the municipal cemetery through the Cemetery board, appointed by the Mayor and approved by the City Council.