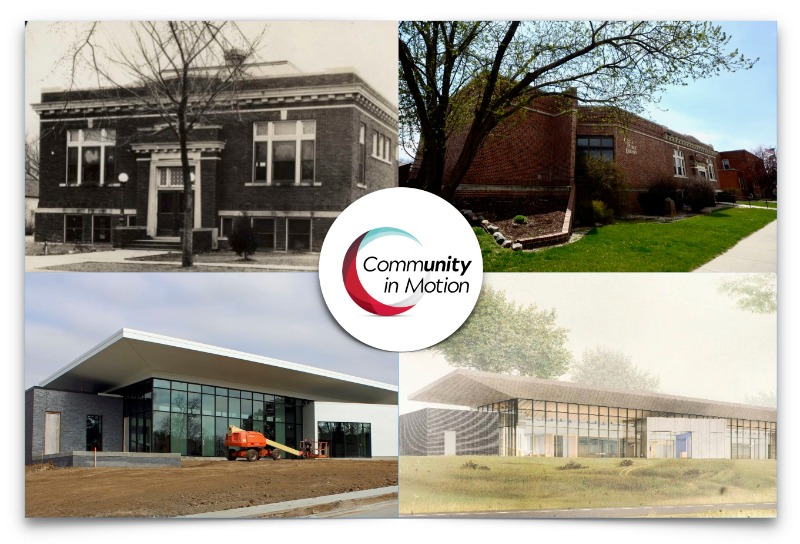 (Updated on Jan. 17: The opening date for the library has been changed due to updated information.)

Sixteen months after an official groundbreaking, Crete Public Library staff will close the old library on East 13th Street and start the move into a new library building at 1515 Forest Ave.

The library will be closed during the two-week moving process before for an opening at the new facility on Thursday, Jan. 30. Tours will be given during the opening, from 10 a.m. - 5 p.m. The last day for library services on East 13th will be Saturday, Jan. 11.

In a symbolic gesture to commemorate moving from the old library to the new facility, the community will participate in a Book Brigade at 2 p.m. on Monday, Jan. 13. Crete High School National Honor Society members, along with library patrons and community members will line the seven blocks separating the two buildings from East 13th Street to 15th and Forest Ave. Two books will be passed from hand to hand as the group continues together to the new library. The public is welcome to participate by lining the route on the south side of East 13th Street from Kingwood Ave. to Forest Ave., then north on Forest to 15th Street.

Crete’s new library and community room will occupy 20,000 square feet of space on the block which formerly housed the city’s first modern hospital from the early 1950s until 2003. It was demolished in early 2018.

The City Council accepted a bid of $5,559,000 from Sampson Construction in August of 2018 with a groundbreaking held just over a month later on Sept. 12. The building, designed by BVH Architecture, includes the new library with youth, adult and technology spaces, separate community room and catering kitchen, which doubles as a storm shelter, as well as a new park.

A sales tax increase of one-half percent was approved by Crete voters in 2016 to provide for the new library and adjoining community room/storm shelter; funds were also anticipated towards community safety initiatives in the form of two new police officers.

The old library at 305 East 13th Street was built in 1915 with a gift from the Andrew Carnegie Foundation; an addition was constructed in 1985. A current feasibility study deemed the structure to have accessibility issues for both people and technology, space limitations for growing programming needs, and maintenance concerns. The library and associated programs host nearly 10,000 visits annually by patrons who access print and digital resources and many programs are held off-site in larger venues.

The City Council has approved an agreement to demolish the old library building while future plans for the area remain under consideration.