Espanol
Current conditions as of 5 Oct 01:54 am CDT 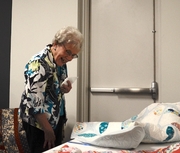 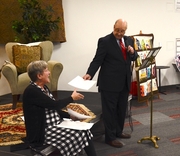 Crete's Tom King as Andrew Carnegie (left) and Chicago actor Warren Brown as Mark Twain stand for a photo in the adult reading room of the library before last Thursday's event.

More than 80 guests were entertained by Mark Twain, played by Warren Brown, and Andrew Carnegie, played by Tom King, on Oct. 7 during a Crete Public Library fundraiser to purchase outdoor musical instruments for Library Park.

Brown, of Chicago, and King, who lives in Crete and serves as the Library Advisory Board President, spoke in character about their backgrounds, while at the same time teased each other about wealth and lifestyles. Compatriots in real life, the audience learned more about these great men during a lively performance. A question and answer period followed, and each man demonstrated his breadth and depth of the men they portray.

Over 30 donated quilted items, including throw quilts, crib quilts, table runners, and wall hangings, and related items were snapped up in a silent auction that was held during the evening. A total of $7,500 was raised from ticket sales and auction proceeds.

One of the biggest surprises of the evening occurred when two anonymous donors together outbid everyone for the quilt, “Ode to Libraries.” They decided the quilt needed to remain in the library to be on display.

The library hopes to have the park instruments installed by Spring 2022.